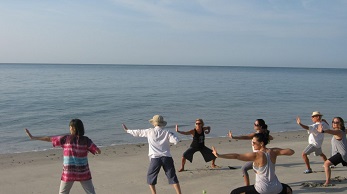 Over the weekend of April 15-17, 2017 the Istmo Resort hosted a Qigong Workshop for the first, but undoubtedly not the last, time.  Led by certified U.S. instructor, Brenda Lyons, the workshop, officially entitled Qigong for Health and Energy was deemed a great success by all of the nine participants who attended.

Over a buffet of delicious Indian dishes served family-style at a long wooden table, we (the attendees) got to know each other.  After dinner, the workshop kicked off with a session that introduced the history and purpose of Qigong and gave us a chance to practice a qigong routine and start learning the Five Element Form.  Like the fire which followed, the introductory session combined a lecture format with guided instruction in the basic movements of the practice. 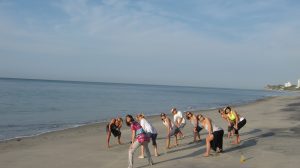 The weekend workshop resumed on Saturday at 7 AM with morning Qigong exercises on the beach, a five-minute walk away from the Resort.  After an energizing breakfast of oatmeal, yogurt, and fruit, the workshop resumed with the second-morning session in the beautifully enclosed pavilion situated amidst the forest and purposefully built for just such activities.  This session focused on the relationship between the Qigong movements, the life force energy of Qi, and overall health.  The physical practice included warm-ups, stretches breathing exercises and a walking meditation.

By then, the retreat aspect of the weekend was beginning to set in and there was a long break after lunch so we could rest, relax, or swim as they desired, with dinner to look forward to.  A luscious repast of tortillas, beans, vegetables, and yellow rice prepared the students for an evening of rest and relaxation.  Many of the participants remarked that they were now getting the first full night of sleep they’d had in months. 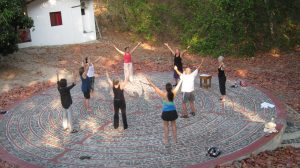 Qigong on the Labyrinth

As Sunday dawned, we gathered on the circular platform that doubles as a labyrinth for walking meditation.  The quietness of the place was preserved, but mindful walking was replaced with the flowing movements of a Qigong practice.  The final session took place back in the pavilion and concentrated on the “microcosmic orbit”, the pathway of yin and yang energy that circulates up and down the front and back of the body.  This session also tied up the loose ends regarding the benefits of Qigong with time set aside for Q & A.  Brenda also provided the participants with a handbook and a set of movements (the Five Elements Form) that they could easily

use at home, thereby ensuring that qigong would become a permanent part of our lives.

Some of the students had commuted from Coronado and left before the delicious closing lunch of rice noodles in a scrumptious peanut sauce topped with steamed vegetables, but all of us realized that they had gone through a transformational experience that seemed to have ended far too soon.  It was widely agreed that Brenda did a wonderful job blending lectures about Qigong’s history and health benefits with movement sequences that unlocked the power of Chi, the energy that surrounds and flows through us.  There was no question that the weekend was a health retreat in every sense of the word.  You could see the aura of relaxation envelop us, leaving us refreshed and ready to tap into our newfound energy.

The success of the workshop was also due, in large part, to the graciousness of our hosts, Ayesha and Sean, and their two children, 4-year old Noah, and Kamila, who had just turned 3.  The wooden cabins we stayed in blended smoothly into the undulating grounds of the resort.  The greenery that surrounded us made us almost forget the extreme lack of rainfall in the area.  The rooms were extremely clean and comfortable.  Istmo is a great place for a weekend away at any time, but it is best suited for workshops like this one, which they hold on a regular basis for groups of up to 20.  In this case, both the Qigong workshop and the accommodations were excellent value.  And we have made a new set of friends with similar interests that we will surely keep in touch with.  Thank you, Brenda, and thank you, Istmo!